Every year, my friend Rodney and I try to take a ride in search of pretty Fall colours. We don't always make it, but last Friday was a fine day and we were able to get off. Actually, when we left my house it had just stopped raining. But, by the time we arrived in Horning's Mills north of Shelbourne, ON, it was sunny and very pleasant.

I made good use of my GoPro POV camera. Some 1.5 hours of video. Takes a lot longer than that to edit it and post to YouTube, of course. Here is 9 minutes of the total ride. Real time for riding the segment shown was a bit more than 15 minutes. Hope you like the resulting video.

And, I will look at the other segments to see if they are worth adding. If they are, I will do more posting.

On the other hand, a little goes a long way, with motorcycling videos.

It was a cold and windy day, even at 11 am. I felt the wind blow me off vertical while getting the bike ready. V-Star Lady arrived and we agreed that if the day got worse, truly awful, we would just give it up.

In the end, we had a great ride. The wind died, the sun shone, and the heated vests worked great. Here is the route she led the way on: 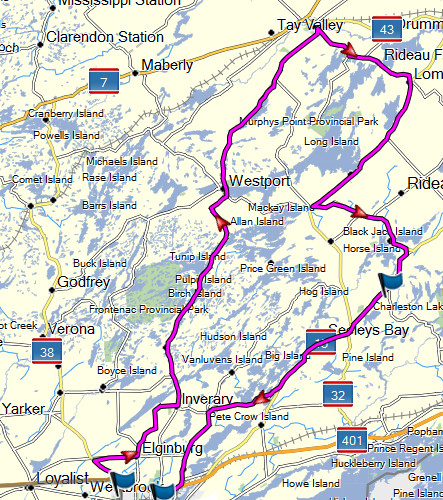 o
A Senic Route north of Kingston to Perth and Around

As you can see, it was a nice loop, quite good roads. However, the fall colours have not really developed and we only had one photo stop: 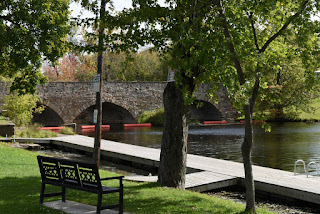 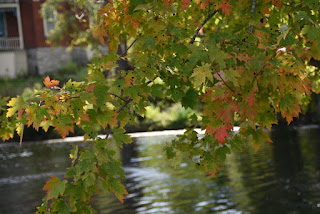 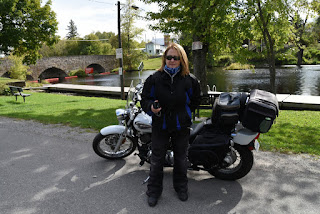 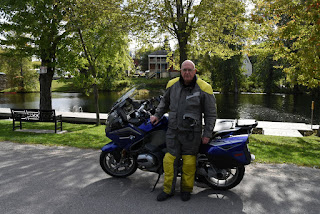 So that was a fine day.

I'm in Kingston ON today, for a ride around some of the local roads. This is a short post just about the ride here from Toronto to my hotel.

The day started out cool to coldish, 10.5 C according to the bike's readout. Given it was gusty, the real feel was even colder. (Balmy when compared to the 0 C temperature one morning on Manitoulin Island though.) I have a heated vest and used it, along with the heated grips and seat. The grips are powerful and I had them at 3 or 2 out of 5. The seat was mostly at 5 or perhaps down to 3 after a long while. Not any different from the heat from the high seat.

I am now convinced the low seat was the right choice. I can plant my foot or feet much more solidly on the ground at stops. And, the angle of my knees seems to be fine. In cold weather and a 300 km ride, I did not feel any complaints from my knees at all. And, there were no hip cramps either. This is a really nice bonus for me. All my other bikes have given me problems. A bit more padding or gel or something would be nice. Might try one of those beaded seat pads, as half the bead thickness would be in the seat, I figure. Any experience from readers?

On the way home, since it will likely be mostly on the 401, a slab, I may put the low seat in the high position as an experiment. Don't know yet.

I live 20 minutes west of Toronto International Airport, if there is no traffic. This morning at 0930, the rush hour continued and there was traffic until Keele St. It was mostly a first gear slog. It's not like this is a new thing, but it just gets worse. There really is no alternative for getting east of Toronto, there just are not other parallel roads. The 407 is both a toll road and ends up being 12 Km north of the 401 out by Whitby, so I chose to try the 401.

By Port Hope I needed a bio break. And, the service centre had  a Tim Horton's so I thought a coffee and something sugary might be nice. I was shivering just a bit. But the serpentine line to the counter was not only full, there was a lineup to get into the serpentine. 1030 in the morning! I decided to press on and my next stop was in Kingston at my hotel room.

I do like the fuel range on RTs. A full tank is good for almost 500 km. The fuel level was down one bar when I left, and by the time I got to Kingston, there was still 80 km range left. The stop and go had a bad effect, I think.

So, that was Day 1, Just a re-positioning, not a very great ride, but another chance to bond with the bike. Hopefully, more to come, pics and all. Some of the trees are changing colour nicely and I hope to see some great stuff tomorrow.
Posted by Unknown at 4:49 PM 6 comments: