First, I am fine. The bike never fell over, but that could have happened. 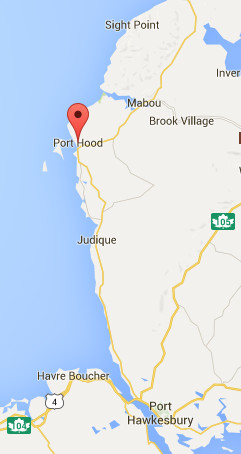 I had never heard of Judique, on Cape Breton, Nova Scotia. I was riding south on Route 19 towards Port Hawkesbury. Nice two lane road, but the pavement is like me in a way, shall we say "mature". So, I ended up riding in the middle of the lane. Route 19 is twisty and equal opportunity for right and left curves, some tight, and many blind crests. Surprises can occur.

I saw a curious object on the road ahead. Brown was my first impression. Cubic, about 3 to 4 inches on a side. Sharp edges. A brick? I did attempt a swerve to the left and almost made it. There was a thump. I thought the front tire was going to join the old rear of last Tuesday, but no warning on the panel and tire pressures were holding. Yes, I know I should not pay too much attention to the panel so I looked up. Figured I got away with it. I have normal peripheral vision but hardly needed it when the big red warning light appeared. Is that a tire warning? Not this time. It looks like an oilcan. Slow down now, but gently and get ready to go to the shoulder. I was down in first gear, feet ready for pavement, pulled the clutch lever...and the engine stopped. The bike stopped and I put the sidestand down to have a look. No traffic at all. No panic.

Yes, this was from my engine. 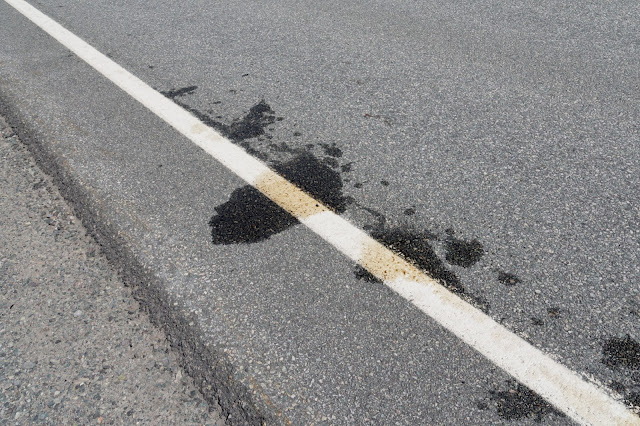 There was a thin line of oil on the road, not visible from the seat if I looked back.
This gout of oil was from when I stopped. 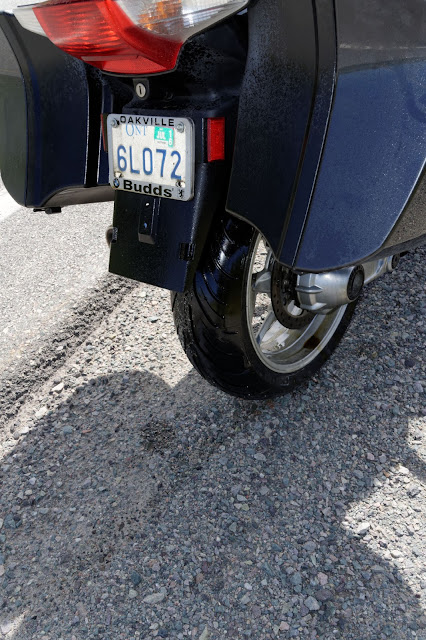 The rear tire got a soaking on the right side. Did not feel any wobble at all. This may have been due to my superb balance (yeah, sure) or some BMW stability control software. I liked the result either way. 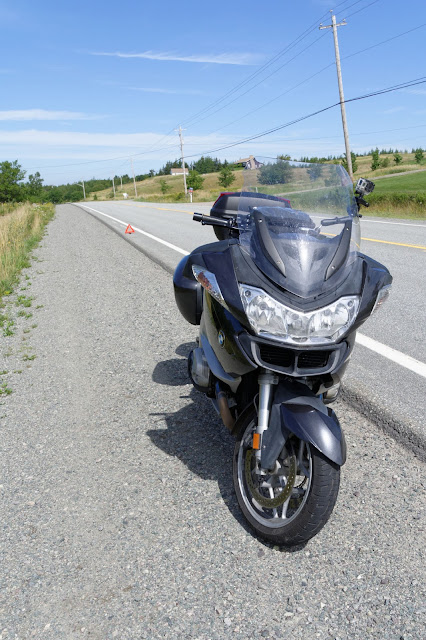 I've carried that safety triangle in a side case for years. Glad I got it. And, by the way, I did not call the police at any time, and saw no police, but someone did slightly relocate the triangle. Two bikes, one of them a BMW, smoked by me after I placed the triangle and was walking back to the bike. Not even a wave. I was really pissed. This was squiddly action for sure. As I was walking to a nearby house, a car did stop to ask if I needed help. At that time I had been adopted by the house owners and did not need any more help, nor could I have ever received more generous and gracious help. If you ever see a funny suited guy walk up your driveway and ask for help, your best efforts are not likely to even approach my hosts Dugal and Pat MacDonald. 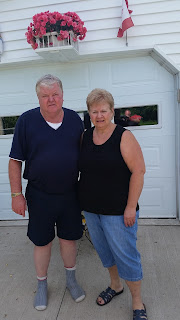 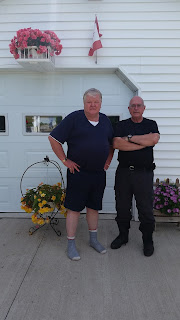 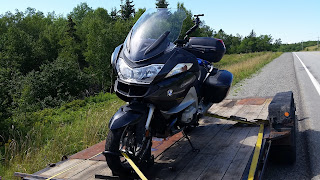 It took a while, but the tow service ordered by my insurance company arrived with a proper trailer with front wheel chock. 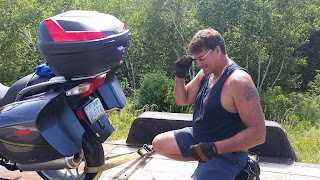 Kevin Mackenzie is the owner of the company and brought his wife and two children along. They were going to take me back to the BMW dealer who changed my tire last Tuesday, then off to a local hotel with a pool for the kids. Next to Dugal, my favorite person of the day. He took several handsfree calls on the way and it was like the soundtrack to Highway to Hell TV show. 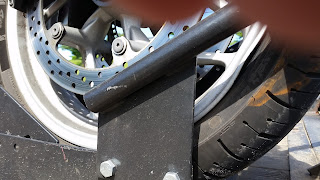 Kevin spotted the bent rim and brick dust right off. 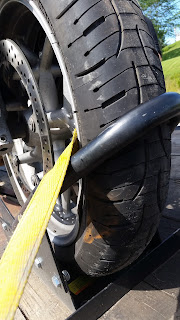 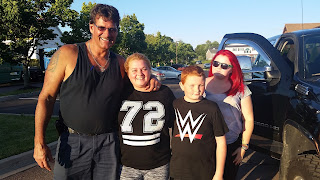 Had to take a picture of Kevin and his family.

Next steps:
You may say, hey Ed, why are you so confident this will go that fast? You might need a whole new engine... . Well, Kevin pointed out there was only a single large smooth edged hole on the right lower engine sump. Looks like a plug got knocked out. Yeah, right. But it could be. Hope springs eternal.

Ok folks, I am going to bed.