I managed to leave a bit before 8am and then had to gas up before getting underway. Took the 407 to Brock Road, down to the 401 and was truly on the way.

Just about noon, I met up with Karen M., aka VStar Lady (see my blog list), another friend of Bob Leong's and of David. I was delighted to meet her at the Tim Horton's in Kingston. After a quick lunch, it was off to see David in a suburb just west of Montreal. Edit: her blog, a favourite, is here: http://ridingonavstar.blogspot.com/

David and his wife Susan made me most welcome. Thanks for the great T-bone steak and also for putting me up for the night. David, as you mentioned, when you move to the Toronto area, we must get together socially. 1 David outside his house

If his hospitality was not enough, David took the lead and showed me the way to the Champlain bridge and said goodbye once he was sure I was pointed in the right direction. Thanks again, David, I had no further route trouble for the rest of the day. Edit: here is the link to his blog, which is terrific: http://www.life2wheels.com/

So off I went on Route 20 towards Quebec. At one point I decided to go the next Tim Horton's. Could not now tell you where it was, but it was getting near Levis.
Now, there are always bike riders at a Tim's, it seems. I really got an education at this one when I started a conversation with a couple of very kind fellows. 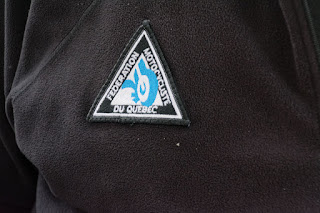 2 Turns out there is an active association in Quebec that advocates for motorcyclists. And, these two fellows are VPs of that organization! They gave me a list of places to see and stay on my trip. 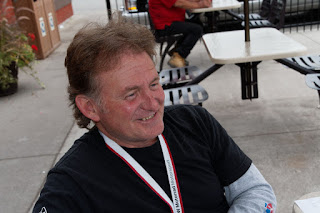 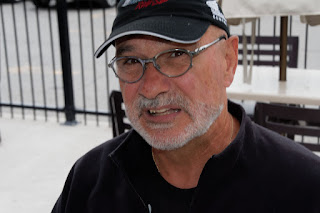 3 and 4  Now it's a bit unusual for me to interrupt folks doing paper work, which is what they were doing, but I had to pass by and felt it would be rude to not say anything, being dressed in my Aerostich Hi Vis Yellow and Gray suit. They were super friendly and gave me a set of great ideas for the Gaspe section of the trip.

After that, the overcast day turned a bit worse. There was some rain and it was cool. I was warm and dry enough though and eventually left the Route 20 and went down to the 132 that runs along side the St. Lawrence River. I was too tired to spend any time taking pictures as I wanted to end up in Rimouski, where I am writing this. Tomorrow, I hope to make it to Perce Rock and a bit farther on. I will try my hand again at some video at least and try to post tomorrow.

After two days, I do have some knee pain and am feeling a few torso muscles, but perhaps a nice hot bath will help. If you will excuse me, I will go and do exactly that...