Not Yet Motorcycle Weather 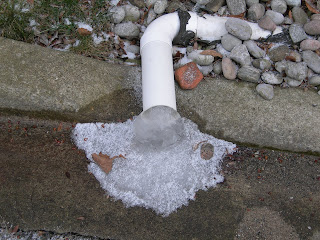 Actually took this a week or so ago. Now the ice has gone ... and there was actually sun this afternoon ... hot sun!

Still, I had to wear gloves in the minivan this morning...

Some riders are out.

Oh yeah, that ice ... probably caused the sump pump feeding this pipe to burn out. Getting new one tomorrow.

So just why did I need a wireless printer server? Because ...

Don't you love a deal?

There is a company called Factory Direct that has several locations and sells refurbished stuff. Always looks a bit grotty, the store and the staff. But, for $29.95, who cares?

Was it going to work? Who cares?

Yes, it works fine. Was it easy to install? Not hardly.

I install network stuff so infrequently that I keep forgetting lessons learned the last time. I was having trouble getting the router and server to recognize each other. Did a lot of stuff in the wrong order too, for example, turned off the WEP encryption unnecessarily - then could not turn it back on!

The router is controlled by its internal web server whose pages are shown on the controlling computer's browser. When I used the radio button to turn off the security, a message "Warning - Security Disabled" or words to that effect appeared. The W of Warning was on top of the radio button for enabling security, so there was no way to click on it!

The solution was to make the browser text size as small as possible. No more overlap and the radio button was accessible again.

Then, I did what I should have done first, added the print server's MAC address into the MAC Address Filter table and allowed "association". Instant recognition. Now the installation program would continue. No surprise. The MAC filter is supposed to make the router ignore unkown devices and it was doing that very thing. Maybe I will remember this next time. Or, remember to read my blog. (Want to place a bet?)

And all then went nicely.

With the server installed, there is no physical connection from the printer to the computer's USB port. No printing problem. But there is no way to get the display of ink levels to appear. That display really was nice - it was visible during the initial installation and testing before each print was printed. This lack of monitoring over the network has been the case for every printer I have used on the old printer server too. There really should be a way but I guess there is only a small demand for this function. A bit inconvenient, But I suppose I can move the laptop across the room for a few minutes now and again. We'll see how it goes.

Posted by Unknown at 6:44 PM No comments:

Finally got fed up with the quality of prints from my older color printer, a Canon S750. It produced acceptable results on some kinds of paper and poor results on others. Mostly, it produced prints with an overall bluish cast and poor colors.

My new printer is an HP Photosmart D7160. I have only had a limited amount of time to play with it, but it seems to be hugely better.

I was able to get it for only $149.95 CDA, plus the usual gov't taxes of course ... . Staples did a price match with Best Buy. Since I had consumed time from two of their staff doing a trial print from a memory stick, I thought I should buy it from them.

They had only one printer on display that was powered up and had ink installed. It was the model I eventually bought, but at the time I did the test prints in the store, I really did think I would be buying the Epson printer beside it. Since I could not do a side-byside trial, I did do a lot of web searching for reviews and the like. Several postings by owners convinced me the Epson consumed an inordinate amount of ink. At least one owner of the HP indicated, or seemed to indicate, the HP did use a fair amount of ink, but not excessive.

For my first trials, my wife chose a recent shot of my grandaughter. I printed it on HP Everyday paper, Staples glossy, and HP Advanced. She could see the difference between each clearly and said the HP Advanced was easily the best. I fully agreed, although after 39 years of marriage, I seldom do otherwise ... .

My wife asked if the HP Advanced paper was a lot more expensive, and I said I assumed it was but would check. I did so the next day, and once again, Staples was kind to me. Imagine, just when I needed it, they had the paper on sale - buy one, get one free!. So, I bought 200 sheets of 4x6 and 24 sheets of 8x10 for about $35.

So, I have lots of paper now, older and newer, and lots of testing to do.

I'll try to figure out the printer's color management / color profile arrangements - a rant or two likely coming to this blog, based on a quick look at the printer's option setting pages.

Smallest Easter ever, just my wife and me. Grandchild with her father, and daughter hard at work at home.
Posted by Unknown at 3:13 PM No comments: