The End of the Trip

I am back home in Mississauga, in good health, taking Physio treatments for my right knee, which was injured in a crash in Washington state on July 18.
I was turning left, 10 am sun in eyes, ended up too near right shoulder, and heading to a drop-off on the right. When I tried to turn left, the front end wiped out on pine needles. I stayed on the road; the bike slid off and down the embankment.
I have decided to spend the insurance settlement on a new car for Dianne rather than replace the written off bike.
In a few days, I will post some pics of the later days of the rally and the accident. Just wanted to let you all know of the situation.
Posted by Unknown at 9:00 PM 6 comments:

The Joy of Good Internet

I have been unable to post due to bad internet at the places I have stayed. Motel 6 is not the only place with poor "high speed internet".
So, I plan to try to go back a week and post some Rally pics and catch up a bit.
Will be having a nice visit with John and Carol, so not likely doing a lot of blogging, but will try to do some.
Just thought I'd let you know.
Posted by Unknown at 1:28 AM 4 comments:

People arrived in force last Wednesday and completely overwhelmed the WiFi nets provided by both the Fairpark and MOA. My Chairman had a private T-Mbile hotspot and it too was not reliable or fast. As a result, I have do catch up. which may take some days to get done.

I left the Utah State Fairpark Sunday Morning at 8 am an proceeded to Boise. I was prepared to stop earlier but there was no room at the inn (actually, no inns to speak of in that considerable distance, almost 600 miles). Could not have done it without the water-soaked evaporative vest. I did not pass a rest stop the whole way, unless it was just before or after a gas/meal stop. Even so, it was over 32 C the whole way. On arrival in Boise, I found a Motel 6, a restaurant I could walk to, and got to bed early. Slept better than I had in weeks, was likely exhausted.

Left there later than planned, 8 am this morning. The day started cool, but noon saw me soaking the vest with water. By the time I got to The Dalles, OR I was through. Got a lovely room at the Shilo Inns for less than a shop-worn Comfort Inn. Restaurant attached and guess where I will eat later?

Off to Anacortes WA tomorrow to sleep over and catch the ferry to Sydney, BC near Victoria.

This may continue tomorrow.

I am going to publish this, don"t know what you will see of videos, may have to further edit.
"Motels dont offer high bandwith....

Now 7 PM, can't see my own videos, poor internet. will post a few pics and go to bed. Will have to await better wifi before I can polish this post.

Last night was a pleasantly cool night. I used a sleeping bag liner without the sleeping bag for the first time. Very pleasant. 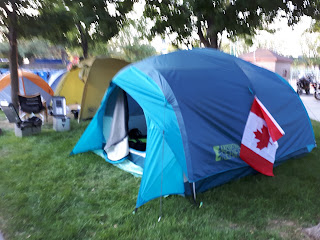 I added a flag to the tent so my fellow Canadians can say hello if they pass by. 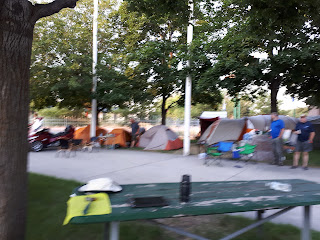 These folks (to the right of my tent) arrived yesterday. Seem to be all part of a big group. 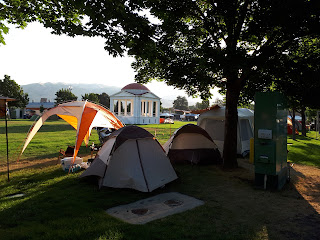 I suspect the field will be filling up today and especially tomorrow.

By afternoon, temperature was 34 C. Skipped breakfast and felt poorly until I had something to eat. Will not do that again. Too hot and too high up. I did drink a lot of water and that is wise. Volunteers get lots of free bottles of water, fortunately.

My alarm went off, as planned, at 5:30 am this morning. It was in the tent pocket right beside me. I opened the cover and swiped to unlock. I could not swipe to stop the alarm because of advertisements! So I tried to power off. Nope. Those ads again. Eventually, the alarm timed out. After a run to the washroom to clean up, I found the setting to prevent advertisement personalization and now have a useful phone back. It was infuriating and I apologized to my neighbors. But, none of them heard it, they said.

The BMW MOA rally in Salt Lake City won't officially begin until Wednesday. Yet, people arrived yesterday to set up their tents and begin doing volunteer labour to get things ready for their fellow members.

It takes a lot of volunteers.

Arriving early helps get nice shady places for the tent: 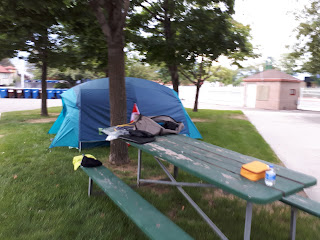 So, I'm here, in a great location.

From Grand Junction CO to SLC UT is some ride!

The first bit is badlands. Then, there is more of that, with exits that say "no services". No gas, no place to pee, nothing. I had gassed up so no worries on my bike which is made for long rides and has a 500 km range.

I gassed again in Price UT, just to be sure I had more than more than enough. More than. Gas is almost as precious as peace of mind.

Right after, the highway is declared to be a Scenic Byway. Sure was, Something old Western movies would use as scenery. And twisty. Mile after mile of twisties. Beautiful and great riding but my right wrist is still sore. But, I loved it.

So, where is the movie? I started the GoPro and thought I let it run. Got 10 minutes of video not worth watching. Battery dieded? Don't know.

Eventually I got to Provo. From there, it is industrial development on both sides of a highway like the 401. And then, exit, a few turns and I arrived at the motel.

Tomorrow, to the rally site and setting up my tent.

Had a great ride today, let the GoPro run until the battery died and edited what was there for you:

The tunnel is the Eisenhower tunnel, opened in 1973 and 1.5 miles in length.

Road is I-70, starting from Idaho Springs. No pics of the run along the river or the western badlands, sorry.